Sudanese culture melds the behaviors, practices, and beliefs of about 578 tribes, communicating in 145 different languages, in a region microcosmic of Africa, with geographic extremes varying from sandy desert to tropical forest.

Sudan is one of the most ethnically and linguistically diverse countries in the world, Sudan has 597 tribes that speak over 400 different languages and dialects though some of Sudan's smaller ethnic and linguistic groups have disappeared,[citation needed] especially in the 1980s and 1990s. Migration of various groups played a part, as migrants often forget their native tongue when they move to an area dominated by another language. Some linguistic groups were absorbed by accommodation, others by conflict.[citation needed] In all of this, however, due to the strong Arabic cultural influence in the country, particularly in the northern part of the country, the Sudanese dialect of Arabic is the lingua franca spoken amongst Sudanese peoples,[citation needed] though the English language may be spoken among the Sudanese elite and portions of the Sudanese populace.[citation needed] Many Sudanese are multilingual.

Sudan has various faiths and beliefs, the main ones being Islam, Christianity, and indigenous faiths. In the north and central parts of Sudan, Islam dominates religious life along the Nile with adherence to Quranic statues and laws being fervent, if not devout. The various indigenous peoples of the Sudan also perform rites and customs sacred to their beliefs and deities. Such rites and beliefs are not systemized in a set of doctrinal rules, statutes or holy texts, but are rather passed down orally by the tribal community from one generation to the next. A person can be counted as a member of his or her faith as the result of being born in his or her ethnic group. Each ethnic group has a faith which, though it may share elements of rituals and beliefs with sister tribes, is unique to that particular ethnic group. Believing and acting in a religious mode, rather than being thought of as a separate human action, is part of daily life and is linked to the social, political and economic, relationships of the group.

Sudan has a rich and unique musical culture that has been through chronic instability and repression during the modern history of Sudan. Beginning with the imposition of strict sharia law in 1989, many of the country's most prominent poets, like Mahjoub Sharif, were imprisoned while others, like Mohammed el Amin (returned to Sudan in mid of 1990s) and Mohammed Wardi (returned to Sudan 2003), fled to Cairo. Traditional music suffered too, with traditional Zār ceremonies being interrupted and drums confiscated [1]. At the same time, however, the European militaries contributed to the development of Sudanese music by introducing new instruments and styles; military bands, especially the Scottish bagpipes, were renowned, and set traditional music to military march music. The march March Shulkawi No 1, is an example, set to the sounds of the Shilluk.

The most popular sports in Sudan are athletics, (track and field), and football. Though not as successful as football, handball, basketball, and volleyball are also popular in Sudan.

Sudanese football has a long history. Sudan was one of the four African nations - the others being Egypt, Ethiopia and South Africa - which formed African football. Sudan hosted the first African Cup of Nations in 1956, and has won the African Cup Of Nations once, in 1970. Two years later, the Sudan National Football Team participated in the 1972 Olympic Games in Munich. The nation's capital is home to the Khartoum League, which is considered to be the oldest football league in Africa.

Given the cultural and religious differences within the country, Sudanese clothing varies among the different parts and peoples of Sudan. However, most individual Sudanese wear either traditional or western attire. A traditional garb widely worn in Sudan is the jalabiya, which is a loose-fitting, long-sleeved, collarless ankle-length garment also common to Egypt. The jalabiya is accompanied by a large scarf worn by women, and the garment may be white, colored, striped, and made of fabric varying in thickness, depending on the season of the year and personal preferences.

A similar garment common to Sudan is the thobe or thawb. Like the jalabiya, the thawb is a long, tunic-like garment, although it may have a collar, be less loose-fitting, or have shorter sleeves or length than the jalabiya. The word "thawb" means "garment" in Arabic, and the thawb itself is the traditional Arab dress for men, although the word may also refer to similar tunic-like garments worn by women.

Sudanese football teams such as Al-Hilal and El-Merreikh are among the nation's strongest teams. Other teams like Khartoum, El-Neel, and Hay-Al Arab, are also starting to grow in popularity. 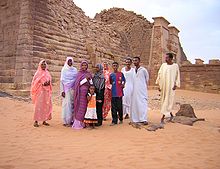 Sudanese tourists by the Meroe pyramids in various types of clothing. 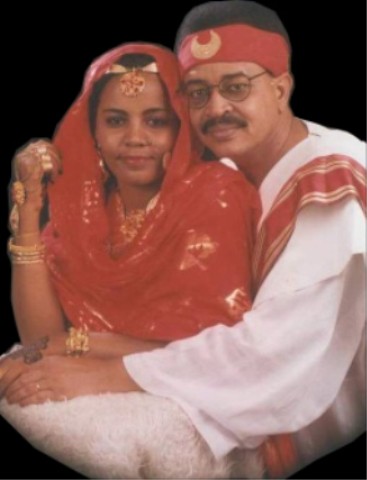 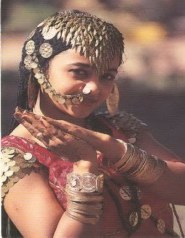 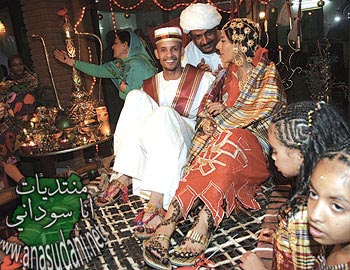 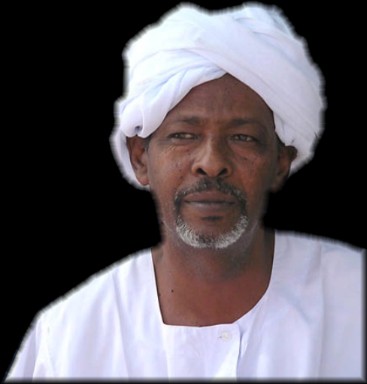 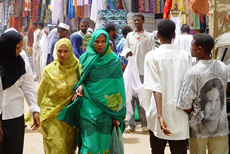 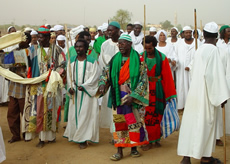